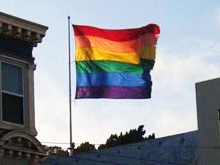 For over a month, Russia has been making headlines thanks to a new legislation prohibiting "propaganda of non-traditional sexual relations among minors."

In 2012, the country welcomed nearly 56,000 Canadian travellers, and all eyes have been in its direction with the upcoming Sochi Winter Olympics in 2014 and FIFA World Cup in 2018.

But the new laws – which are indisputably anti-gay, when you get right down to it – are sparking widespread reaction across the globe and while some are calling for a boycott of the Olympics, others are suggesting a boycott in travel.